If problems with mycelium block arise on the colonization stage: uncolonized spots, green mold or brown water on the bottom of the bag, the cultivator realizes why such a block can give poor harvest or no yield at all. 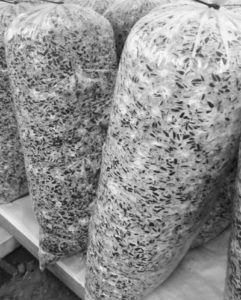 But if the overgrowth was very good – the bag is without any spots, all mycelium is white, then why there aren’t any primordia or mushrooms?

There are two reasons for this phenomenon: defective mycelium or inappropriate incubation and microclimate conditions in the growing chamber. Let’s take a closer look at these issues.

Serious laboratories keep track of the constant updating of stock cultures and sell well-formed dikaryotic mycelium ready for fruiting bodies production. If you prepare mycelia at home or buy from a manufacturer, which is often a propagated stock culture or consumer mycelium, it can degenerate or lose the ability to form mushrooms. This mycelium grows well, forming the only the vegetative mycelium, but the fruiting bodies, which are the reproductive organs, are not produced anymore.

What to do in this case?

There are no tricks how to make such a batch fruit. They all simply don’t work because such mycelium simply has no reproductive ability. Therefore, it is necessary to buy the mycelium from reliable manufacturers, to be sure of its quality. To know how to choose quality mycelium see here.

In our article “microclimate regimes in the incubation chamber” temperature and humidity incubation parameters are described in much detail. Any deviations from these parameters can lead to fruiting inhibition even in a well-overgrown mushroom block.

The pins or primordia are formed with a minimum humidity of 78%. At lower humidity levels (70%), they can start 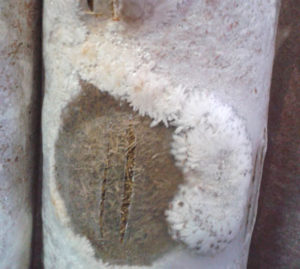 forming, but later they wither and dry out.

If the humidity in the incubator is under 70% at the stage of block whitening, the slots begin to dry, forming a dry “plug” just in 3-4 days. Mycelium growing close to this area starts to dry out and die. In the plug itself, drying substrate causes microcracks and through these crack moisture starts to escape the bag, disrupting gas and water exchange in the block. All this signals the mycelium of adverse conditions both outside and inside the block, and therefore reproductive organs (fruiting bodies of oyster mushrooms) are not formed.

If the substrate initially had high humidity level (70-72%) after heat treatment, mushroom pins can be formed under the film, not in the perforated areas (they are quite dry), but in the areas where the film has air pockets. 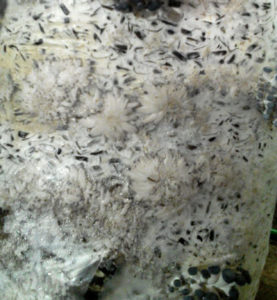 What to do in this case?

– If this has already happened, you need to gradually raise the humidity in the incubator but no more than by 4-5% per day until it reaches 85-87%. Wait for the perforations to become moist and then move bags to the growing chamber.

– To prevent such situation in future you need to keep the appropriate high humidity level in the incubator according to substrate blocks’ stage of development.

Microclimate regimes in the incubation chamber

How to understand that the mushroom block is ready for fruiting?