The fungus consists mainly of water. There is no barrier between the mushroom surface and air. Stable optimal relative humidity influences the quality and quantity of produced mushrooms, and , therefore increases profit. But in a number of cases they still lead to losses.

Why is this happening? Humidity has two dimensions – quantitative (relative humidity) and qualitative (the size of water drops dispersed in the air). 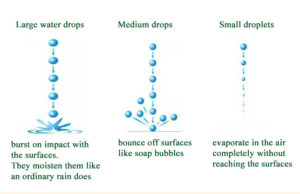 The size of water drops matters. Non-evaporated large drops precipitate on the surface of the fungus and inhibit respiration. Large condensate drops on the surfaces increase the risk of infection. This also leads to water over-consumption. Large drops have a smaller surface than many small ones and tend to cool the air worse in the summer. A small drop ( up to 4 microns) has a large surface tension. This feature allows air to be decontaminated by binding dust particles and microorganisms. 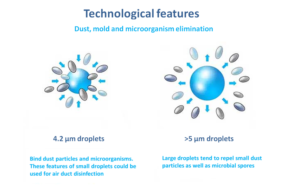 Small droplets do not block oxygen access in fungi. The similar ions repel, providing an even distribution of moisture and oxygen in the air.

So with the same relative humidity, some mushrooms appear healthy and fast-growing, while others become damaged, constantly suffering from excess water and infections.

Why there are no mushrooms on a well-colonized substrate block?