Ventilation – a key component of the microclimate system 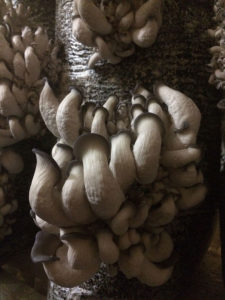 Ventilation is an important component for proper climate formation in the oyster mushroom cultivation chamber. If ventilation is organized correctly, mushroom clusters are poorly aerated and carbon dioxide and moisture buildup occurs. As a result, we are witnessing the death of fungi and various fruit deformations, which are popularly called “diseases”. Read more about it here.

Also due to improperly organized ventilation, condensed water appears on fungi which often causes their death. The danger of is that most mushroom growers are not able to detect condensate buildup, but they can only see its effects – small yellow mushrooms, which “suddenly” cease to develop. This process is described in further detail here.

Ventilation unit cannot be regarded as a separate system, but part of the general microclimate system.

In this article we describe all the equipment you will need to create a perfect microclimate. Climate control unit in the cultivation room includes: a heat exchanger and a cooler (chiller or air conditioner, if you plan to work in the summer), fresh and recirculated air mixing chamber, and moisturizer.

Supply fan must distribute the preconditioned air around the room – with a proper moisture, temperature carbon dioxide levels. These parameters depend on the particular strain and mushroom development stage. You can download the regulations for the cultivation of various oyster mushroom strains here.The file contains a table with detailed data on temperature,

humidity and CO2 levels to be maintained at each stage of fungi development.

Preconditioned air is distributed around the cell by central and lateral air ducts. The central duct is located above the passage. Lateral ducts are directed towards one or both sides of the passage. In lateral ducts there cups, from which air is blowing towards the floor capturing gaseous fungal metabolites and CO2 (this phenomenon is called ejection). In order to fully wash mushroom clusters air jet velocity should be at least 4 m/s (for high rooms it should be 4.5), and for single-zone system – 5.6 m/s. Air exchange in the manufacture of oyster mushrooms is calculated from the amount of substrate in the chamber.

Her are some calculated values per ton of substrate:

Basing on these figures, the supply fan is calculated. For example, if you have 10 tons of substrate and bizonal cultivation system, the fan must have a capacity of at least 2,200 to 2,700 cubic meters (including air resistance losses).

Exhaust fan in the room is a MUST! Its mission is to remove as much fresh air as it is blown into the camera. An important detail – FRESH air! Recirculation is not taken into account. Thus, the exhaust fan should be calculated depending on which type of setup you have single- or bizonal.

If you have single-zone system, then you will have periods of mass fruiting, when it is necessary to work without any air recirculation. Then the exhaust fan power should be equal to that of a supply fan, except losses (they typically amount to 10%). Also a fan should be equipped with an inverter, which will reduce the speed (and power) when the recirculated air is used. The second option is to install an additional fan to turn it on only during fruiting. But during the rest of the days the main fan will be operating, which should be calculated basing on the percentage of recirculation during other periods.

In bizonal system about the same number of substrate blocks is fruiting after their removal from the incubator. Therefore it is possible to calculate the exhaust fan, taking into account that the fact air recirculation will be in constant operation.

Ventilation in the grow room should operate permanently, not according the timer!

Microclimate regimes in the incubation chamber