How would the sales of oyster mushrooms change if the buyer saw mushrooms of the same quality as those growing in the production facility? They lose quality after harvest, mainly because of very high metabolic activity and high water content. Many vegetables and fruits also contain 90% water, but in fungi only one cell layer (often damaged during picking) acts as a barrier, protecting against moisture loss and microbial activity. Packaging in various plastic films reduces evaporation, and can either extend or reduce the shelf life. In relation to this packaging film should be carefully selected. Due to the damage of mushroom tissues, the shelf life is limited to several days under normal cooling conditions. The product sales at times resemble a real race. Increasing the shelf life by some extra time gives a tangible head start for mushroom production.

The use of calcium chloride in oyster mushroom growing.

Scientist Neveen Chikthimmah has found affordable means of improving “mushroom longevity”, which have long been used in European countries. The mechanism of their action is based on the inhibition of microorganism activity. The application results are impressive compared with the control. Application of 0.75% hydrogen peroxide (H2O2) and 0.3% calcium chloride (CaCl2) reduced bacterial populations on fresh mushrooms by 87%, the shelf life lasted 6 days, the color of the mushroom also improved. The astringent properties of calcium chloride retain water longer in mushroom fruit bodies due to a film formation on its the surface. Due to this, moisture is retained, providing not only elasticity, weight, resistance to cracking, but also the main thing – overall health of mushrooms. This film prevents the ingress of bacteria into the fruit bodies. The positive results of calcium chloride use for portobello mushrooms have become encouraging for oyster mushrooms as well. A comparative analysis was carried out at the industrial complex. Calcium chloride was added to the portion of the substrate before packing (experiment) and compared with the same lot without additive (control). Noticeable changes occurred on the 9th day of incubation. The colonization of the experimental blocks was uniform, the condensation under the film became more transparent and the blocks turned white on the same 10-11 day as in control.On the day of picking, there were no visual differences, but during the collection there was resistance to mechanical damage, greater plasticity, elasticity, more water came out when pressure was applied to the caps. After three days of storage, the difference became significant. So it became interesting to produce high-yielding R5 strain at high temperatures, the main disadvantage of which is the fragility of fruit bodies. According to the owner of the complex, R5 grown at a temperature of +20 °C , became as elastic as at +14 in winter and R80 without the use of chloride 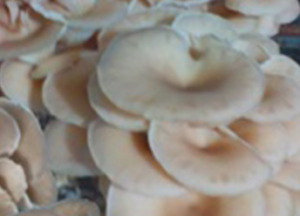 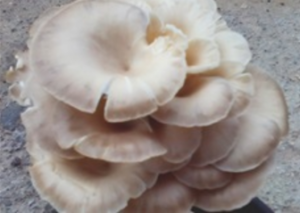 At most enterprises, air cooling in summer is not provided for optimum parameters. Only adiabatic humidification is used to reduce temperature. Temperature stabilization in the chamber is given to the “will of nature”. A noticeable cold snap makes mushrooms growers happy, but it is not always useful for mushrooms themselves.

Look at the photo below.

According to the archival data, the temperature in the cell decreased by 1.5 °C. In the control group, yellowed primordia and fruiting bodies were identified.The experimental batches retained commercial attractiveness (Fig. 1a) in comparison with control ones (Fig. 1b). 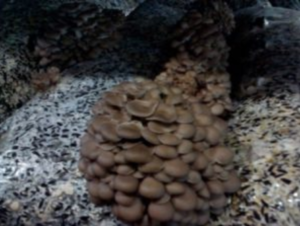 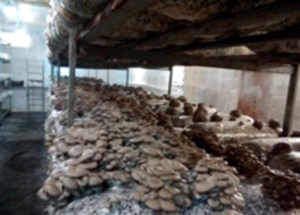 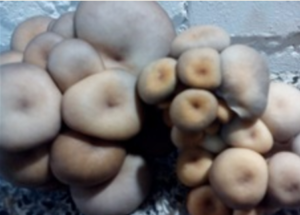 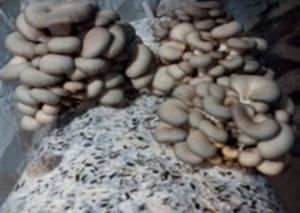 Another means of resisting bacteriosis is chlorine dioxide. It is actively used both in the watering of portobello mushrooms and when soaking the chopped mushroom to fight pseudomonads. The toxins of these bacteria destroy the cell walls of fungi, and the metabolic products cause surface slimming. The shelf life of picked and sliced portobello mushrooms is doubled. Oyster mushroom has a larger surface area than portobello mushroom does. This increases the dehydration risk and microbial attack, therefore, the responsibility for its storage is much greater. Will the experience of sprinkling or soaking oyster mushrooms be beneficial?The issue of extending the shelf life is relevant to such a large country as Russia because of the long transportation from mycelium to the ready product on shelves.

Determination of substrate moisture by drying