How to understand that the mushroom block is ready for fruiting?

When mycelium is ready to produce fruit bodies, the substrate becomes uniformly white, the block becomes not loose anymore. With a slight pressure, it is tight to the touch and slightly springy.

It looks “alive”. It’s hard to explain in words, but in the photos, I think you’ll see the differences – on the right – there is a block overheated during incubation stage, and the white color under the film is faded. It looks like a layer of putty.

On the left it is a photo of a fully colonized bag ready for fruiting. The difference is visible even in the opening of perforations (holes). In a living bag near the perforations, a fluffy layer forms – it is the start of primordia formation. In the photo on the right, the perforations are not open. 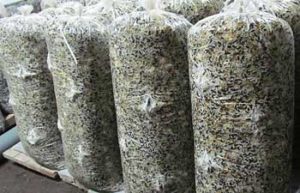 It begins with the appearance of the so-called primordial nod, which occurs under the film in the immediate vicinity of the perforations. It looks like a white fluff or a piece of cotton wool. Then mushroom rudiments or primordia appear. At first they appear in the form of small dots, the size of poppy seeds, white in color, then the mushroom buds grow to the size of a pinhead and start to become gray. How should primordia look like? Powerful, homogeneous hemispheric formations, appear at the slits and, as a rule, completely fill the perforation area.

If you have a bizonal cultivation system and you move the blocks from the incubator to the fruiting room, then it is best to do this at the stage of the ” primordial nod or at the beginning of primordia formation.

– incubator temperature is too low. Bags after incubation must be moved into a room with a temperature of at least 20 degrees, so that they do not cool down, otherwise the initial growth speed of fungal hyphae decreases significantly. After that keep the temperature constant, without swings.

In such cases the block tends to overgrow in spots. In places where the mycelium is concentrated there will be local self-heating and active growth, while in other places of the block a competitive microflora will develop – spores of molds or bacteria. In the future, they can heat a block, but only by their own development, and growth of oyster mushroom mycelium is suppressed and may cause a death of such block. Please read how to add mycelium to the substrate here.

– mycelium itself is weak, sieved or home made with a violation of technology.