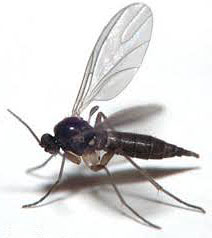 Mushroom growers unite these insects under the same common name “fungus gnats”. Due to these organisms oyster mushroom primordia and clusters suddenly begin to wilt.

Appearing in the substrate, the larvae can completely eat the mycelium even in well overgrown blocks. In the warm season, the white block can become dark in a matter of just a couple of days.

If you break such a block in half and observe it with a magnifying glass, you may see small white or orange larvae, similar to small worms, creeping along the substrate.

What chemical agents can be used to fight them and at different stages of production?

In case of fungus gnats or flies appearance and also for prevention, it is necessary to treat the incubator and growth chamber premises by spraying.

Our company sells chemical agents from the group of pyrethroids, which can be used to treat rooms and premises, even in the presence of substrate blocks, up to the appearance of primordia.

These are represented by such agents as Arrivo, Fastac (Ivanhoe), Decis Lux. It must be remembered that with the constant use of pyrethroid compounds, insects may develop cross resistance to them.

Therefore, it is necessary to alternate the use of these chemical substances with the preparations from the group of organophosphorus pesticides, for example, Nurelle. It is used immediately after loading the chambers with substrate blocks. The treatment is carried out using smoke pellets, you will need 4 pieces for 20 tons of substrate. The dose of Nurelle per one smoke pellet is 20 ml.

All of the above listed agents are also used to treat working surfaces, accessories and equipment. A solution containing 50-100 g of substance per 10 liters of water is used in this type of application.

Some insect groups (for example, gall midges ) have one type of parthenogenesis – a life cycle when the larvae reproduce other larvae, bypassing the stage of winged imago insects. This means that you can not see flying midges, but the substrate is still damaged by the larvae infestation. How can we get rid of these insect larvae?

To prevent the appearance of insects from eggs and the to destruct larval stages, inhibitors of chitin synthesis are used. In our store you can buy:

They are used in the cultivation of both portobello and oyster mushrooms .

In portobello chambers, chemical agents are introduced with the first watering of the casing layer.

When growing oyster mushrooms, agents are introduced into the substrate during inoculation. The dosage of the preparation to be introduced can be found in the detailed manual.

Mushroom gnats and other parasitic insects can greatly reduce the yield of oyster mushrooms and portobello mushrooms. It often happens that mushroom growers do not pay attention to the emergence of individual insects flying in the growing chamber and can not correctly estimate their number. But they start to realize the problem only when they see wilted clusters of oyster mushrooms, eaten at the base, or even larvae similar to small worms crawling over mushrooms. In this case, only chemical agents can help.

Application details, action spectrum and application rate of these products are described in detail in the product manual sheets in our stores.

How to deal with molds