Determination of substrate moisture by drying

When analyzing raw materials or substrates, it is very important to select an average sample. According to the chemical composition and basic properties, the average sample should be the accurate replica of the entire batch of substrate or raw material. Therefore, sampling is carried out in stages. To begin with, one-time samples are obtained, then the general samples, and after that average samples. 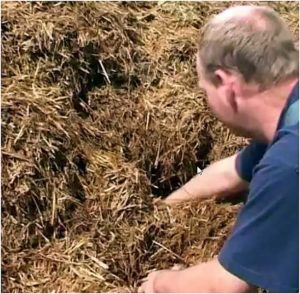 A single sample of hay or straw from unpressed raw materials (200 – 250 grams from each site) is selected manually or by a sampler – one sample per ton of raw material.

To do this, remove the wire or string from the bale, then gently, avoiding ripping the grass stalks and forming debris, take one sample from each bale: a surface layer from the first bale, the next layer from the second, and so on.

When sampling the sunflower husks or other loose raw materials, a special probe device is used. Samples are taken from different places: from above, from below, etc. The obtained samples are spread loosely on tarpaulins or paper and checked for uniformity.

The general sample is obtained after combining and mixing all single samples and can be quite large by weight (but not more than 5 kg).

Selection of an average sample, is carried out from a general sample after mixing it thoroughly. In this case, in order to obtain an average sample of straw or hay, the total sample is placed on a tarpaulin 2 × 2 m in size and about 0.5-1.0 kg is collected in small portions of 90-110 g from different places throughout the area. At the same time, the trash and small parts of plants formed during the mixing of raw materials are also collected and included in the average sample.

For sunflower husks in case of its uniformity, individual samples are mixed, resulting in a general sample from which an average sample weighing about 1 kg is taken. Quarting method can also be applied.

For this, the sample is spread in an even layer of 1-2 cm in the shape of a square, which is divided by diagonals into 4 triangles. Two opposite ones are discarded, and the other two are re-mixed and divided until a 400-500 g sample is left for analysis.

Sometimes it is necessary to analyze the humidity of the substrate block. Because of the temperature difference between the center of the block and air, water tends to build up in the layer under a plastic film and if the average substrate moisture has to be measured, the disc is cut and substrate is mixed,after which average sample is taken.

The average sample is packed in a polyethylene or multi-layered paper bag. A label is attached to the bag, the same label is placed inside the bag. The label indicates the following data:

The name and position of the person who took the sample.

This sample is considered the final average sample and it is transferred to the laboratory for chemical analysis.

Analytic samples of straw or hay are ground (with scissors or knife) to a particle size of not more than 1 cm and thoroughly mixed for subsequent quarting to the required weight.

For obtaining the comparable data, the mass share of any added component is calculated and given in percentage against absolutely dry substrate, since the substrate and the components isolated from it are hygroscopic and in the air-dry state contain a certain amount of bound water according to the air humidity. Determine the moisture by drying three samples of the test raw material, taken from an average sample, to a constant mass at 105°C in a drying cabinet (moisture testing oven). This produces an absolutely dry substance.

Determination method. In a glass or aluminum sampling bottle with a ground stopper lid, (pre-dried and weighed on an analytical scale), we add about 1 g of the test material (sawdust) and dry with the sample in an oven for 3 – 4 hours at a temperature of 103 ± 2°C. At the end of this period, the test bottle with the sample is cooled in a desiccator, covered with a lid and weighed. The secondary and subsequent drying continues for one hour. All this is repeated until the contents of the bottle dries up to a constant mass. It is repeated until the last weighing shows a loss in mass of less than 0.0004 g or mass increase due to oxidative processes.

The relative humidity of the substrate (%) is calculated by the following formula:

where m is the sampling bottle mass (g);

The divergence between the results of two parallel measurings should not exceed 0.5%.

The great majority of mushroom producers does not own laboratories and are forced to use the services of agrochemical laboratories. However, taking to account the remoteness of laboratories from mycelium source and the need to have daily operational results to obtain a quality substrate, there is one less accurate, but much faster analysis. If conducted carefully, the obtained results will have almost the same accuracy relative to laboratory results.

The necessary equipment for this analysis consists of a microwave oven, kitchen scales of up to 3 kg and with accuracy of 1 gram, a drying bowl is a wide plate.

Take a sample of 100 grams and dry it to a constant weight during 20-40 minutes ventilating the oven every 5 minutes. The specified microwave power is determined experimentally based on the drying time. In case of burning or smoldering, the results of the analysis are unreliable, it is necessary to reduce the power and to redo the analysis.

Where can I make an analysis of straw for mushroom blocks